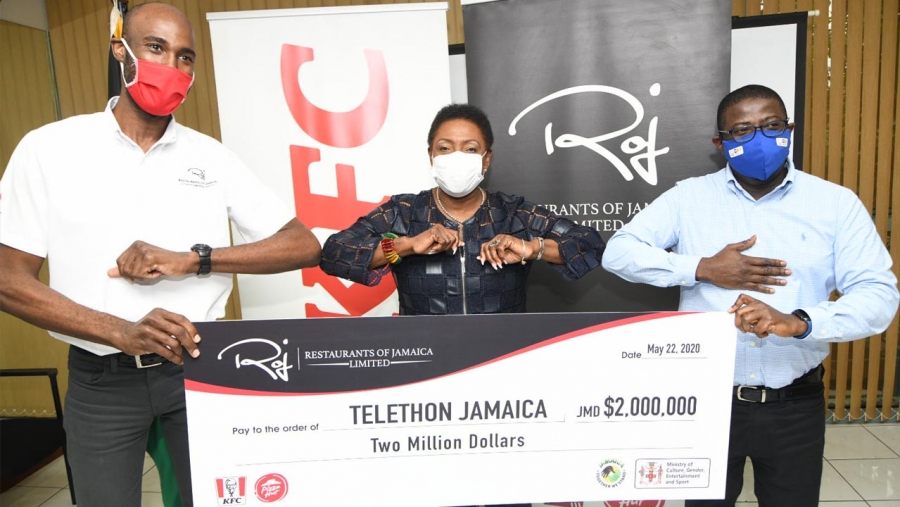 The Minister of Culture, Gender, Entertainment and Sport, the Honourable Olivia Grange (centre) does elbow bumps with with the Brand Manager of the Restaurants of Jamaica Group, Andrei Roper (left) and the Chief Executive Officer of the National Health Fund, Everton Anderson on Friday at her offices in New Kingston. Restaurants of Jamaica presented a symbolic cheque of J$2M to Telethon Jamaica to provide PPE for frontline workers. The NHF is the government agency procuring the PPE.

Kingston, 22 May 2020 – The Minister of Culture, Gender, Entertainment and Sport, the Honourable Olivia Grange, has announced that Telethon Jamaica has so far raised J$60 million to purchase Personal Protective Equipment for frontline workers.

The Minister made the announcement as she accepted a symbolic cheque for J$2 million from Restaurants of Jamaica Group (operators of KFC and Pizza Hut in Jamaica) on Friday (today) at her offices in New Kingston.

Minster Grange said:
“We are now up to 60 million dollars in collection and pledges. We have collected most of what has been pledged and today, KFC have delivered their cheque to us.”

The Brand Manager for Restaurants of Jamaica, Andrei Roper said:
“It was necessary for us to step up and make a contribution like this to show how much we value the contribution being made by those persons who are putting themselves at risk for all of us on a day-to-day basis.”

Minister Grange said she was heartened by the support that Telethon Jamaica continues to receive. “I am really happy to see how Corporate Jamaica and the Jamaica Diaspora have contributed tremendously to this effort,” said Minister Grange who highlighted the generosity of the National Association of Jamaican and Supportive Organisations in the United States which originally pledged US$10,000 but wired US$11,000 into the account.

The Minister said the process of transferring the money collected to the National Health Fund, which is the government agency procuring PPEs for frontline workers, has started.

The Chief Executive Officer of the National Health Fund, Mr Everton Anderson, said the Telethon has really helped to equip frontline workers with the gear they need.

Mr Anderson said:
“To date, we’ve received in the region of US$80,000 yesterday, another US$47,000 prior and about J$12 million. This is a major initiative and a successful initiative and we must commend all the persons involved in coming up with this idea. It has really brought overseas Jamaicans, individuals and businesses, together, doing something positive for Jamaica and the health team, every single health worker, appreciates this.”

Minister Grange also thanked members of the entertainment community, at home and abroad, for contributing their time and effort towards equipping frontline workers with PPEs.

“A number of Jamaica artistes came on board and continue to give support,” said Minister Grange.

She said that the Telethon Jamaica Highlights show that will be broadcast on national television and on social media across the world on Monday, May 25 will feature some of the artistes who were not in the original broadcast.

The Minister said that people will be able to make a contribution to the effort to provide PPEs for frontline workers while enjoying the music.

“It’s not only about the money,” said Minister Grange. “It’s also about sharing with others the inspiration that will come from the performances that we will see as we stand together in this time.”

Cash/cheque donations are accepted at any Paymaster location in Jamaica.

We place people at the heart of everything we do.

We believe that culture is the great equaliser and transformer that makes ordinary men and women great.

We believe that gender equality is essential in a modern society.

We believe that an entertained person is a happy person and happy persons make happy societies.

We believe that physical activity enhances lives and sport is the medicine that heals and corrects.