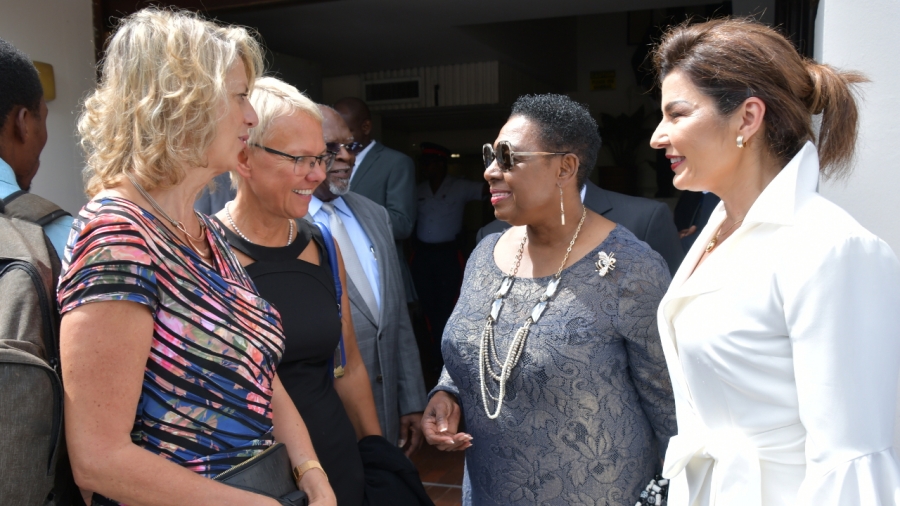 Minister of Culture, Gender, Entertainment and Sport, the Honourable Olivia Grange (second right) in conversation with Canadian High Commissioner to Jamaica, Her Excellency, Laurie Peters; Head of the European Union Delegation to Jamaica, Ambassador Malgorzata Wasilewska and Rose Tavares-Finson, wife of the President of the Senate (left to right) following the Ceremonial Opening of Parliament at Gordon House. MCGES\ Shanna K. Salmon

The Cultural and Creative Economy Act as well as the Entertainment Industry Act will also be brought to the House for approval.

This was announced by Governor-General, His Excellency the Most Hon. Sir Patrick Allen, who delivered the Throne Speech during the ceremonial opening of Parliament on Thursday (February 14) under the theme ‘In Partnership towards the New Prosperous Jamaica’.

“Jamaica scored a major victory with the inscription of reggae music on the United Nations Educational Scientific and Cultural Organization (UNESCO) list of Intangible Cultural Heritage of Humanity,”

This, he said, demonstrates that reggae “has served to foster a better understanding of musical art as a tool for promoting dialogue among people and appreciating cultural diversity among ethnic groups worldwide”.

Also to be undertaken during the new legislative year is continued review of key pieces of legislation to support the elimination of gender-based violence, including the Domestic Violence Act, Offences Against the Person Act, and the Sexual Offences Act. The Prevention of Sexual Harassment Bill is to be tabled.

In the area of Sport, the Government will seek to conclude a review of the National Sport Policy along with a study on the contribution of sport to national development and employment.