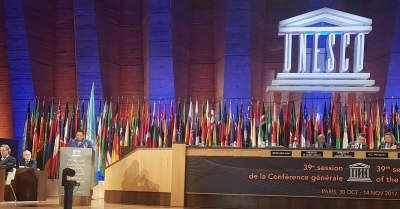 Kingston, November 14, 2017 – The Minister of Culture, Gender, Entertainment and Sport, the Honourable Olivia Grange, has announced that Jamaica has been elected to Unesco's Inter-governmental Council for the Information for All Programme for the period 2017-2021.

According to Minister Grange, the Council "aims to assist Unesco member states to develop and implement national information policies which create an equitable society through better access to information."

Minister Grange says Jamaica will "benefit from capacity building in this area of policy development" by being a member of the Council.

Minister Grange also announced that Jamaica will be represented on the Council by the Executive Director of the Broadcasting Commission, Mr Cordel Green, who also sits as Chairman of the Information Advisory Committee of the Jamaica National Commission for Unesco.

Jamaica was also elected to the powerful Executive Board of Unesco during the organisation's 39th General Conference which ends today (Tuesday) in Paris, France.

Minister Grange will represent Jamaica on the Executive Board, which focuses on the development of policies and programmes to direct Unesco's activities.